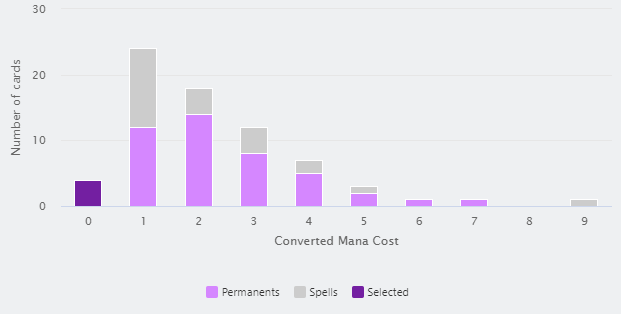 And I love it. It’s fast, it’s stacks on stacks (not to be confused with stax!), and it’s taught me a lot more than I expected when I started powering up decks. Prior to dipping my toes into cEDH, which was around the time Flash got banned, I gave mana curves very little thought.

There’s a lot to be gained from lowering your mana curve and lowering the curve doesn’t mean you can’t add those awesome big splashy spells, and it doesn’t mean you have to sacrifce card quality by playing lower mana value (MV) spells. With a lower curve, you can pump out creatures out onto the battlefield, build defences, and start amassing value as early as turn 1 or 2.

What is “The Curve”?

If you add your deck onto a deck building site, you can quickly and easily see the shape of your mana curve. Nice curves usually peak at 2MV or 3MV, and then tail off from there. If you don’t want to spend the time adding your deck to a deck building site, you can lay the cards out on a table and make piles of each CMC, and get a nice physical representation of the curve of your deck. You’ll usually see people doing this in sealed and draft events. This is one of my high powered casual decks:

When lowering your curve you really need to think hard about the quality of the cards you are putting into your deck. It’s very easy to take a Shivan Dragon out of your deck, but what do you replace a 6MV flying 5/5 with?

Shivan Dragon is a beater which offers you no other value, and while this isn’t a bad thing (I’ve died to a Shivan Dragon in 1v1 commander before), you will probably advance your game plan quicker if you can play, say, three 2MV spells rather than that one big Dragon on that turn.

On the flipside however, there are a lot of low-MV cards which add nothing to a deck. If you’re thinking of putting a vanilla 1/1 which costs 1 mana in your deck in place of Shivan Dragon, you’re not gaining anything. Ok, you can swing out on turn 2, but there’s no use dealing 1 damage to an opponent who started out on 40 life.

Dig through your collection, pull out all the cards with a mana value of 2 or less and read them. Think about how they can give you advantage in the early game. An example (which probably won’t be in your bulk pile) is Dark Confidant – the turn after you cast it you’re amassing card advantage. Card draw will win you the game; if you’re digging through your deck faster than everyone else you are far more likely to reach your win con before they do.

When looking at these cards you need to be thinking of a few key items – ramp, card draw, counter magic, and stax (I hate to play against Stax, but love to run it).

Mana dorks are some of the best ramp in commander as they give you bodies to chump block with and get you extra mana by the next turn. You can’t go wrong with adding a Llanowar Elves to a deck with green, or even Priest of Titania if you play against a lot of green decks.

If you listen to any magic podcasts, I’m sure they will have mentioned that card draw wins you the game, if you’ve seen and drawn a bunch of cards, you will get to your win con quicker than anyone else at the table.

Thankfully, Magic has a lot of low-MV cards which are perfect inclusions in most decks.

Oakhame Adversary (weird, I know, it’s 4MV, but most pods have a green deck, so you can get this on board turn 2 and get a-swingin’ and a-drawin’)

If you’re not drawing yourself to a win, the second best way to win is to flat out deny anyone else a win and then slowly meander your way there instead. Many decks are designed to do this, especially if they lack ramp and card draw.

I see a lot of decks running counter magic, but the spells have high mana value, and mean you need to keep 3 or 4 mana open when you pass the turn. For one, it makes it very obvious when you keep this much open, but it also limits you to the spells you can play on your turn.

Ok, finding low-MV counter magic that stops creature spells is hard, so this does limit you when looking for counter magic, but it is worth looking at the spells you’re running and seeing if you can slip in something a little more efficent.

Honourable mentions (thought I’d add at least one for each colour here):

Stax, like Counter Magic, does a great job of stopping your oppents from winning, which in turn lets you take your time in finding a win. Though I cannot promise that this won’t lose you friends.

Some very strong Stax pieces can be played early game, and can force oppents to think about that one card you have out rather than focusing on everything else you’re trying to do.

Rule of Law (or effects simliar to this like Etherswon Cannonist)

Authority of the Consuls

To wrap this up, hopefully this article will help you when thinking about what to include in a deck and why, I am not saying to only use these cards, these just serve as an example of helping you progress (or deny others’ progression) early in the game, and they may in turn help you in casting those big splashy spells that are what makes commander so great.